Toni Alexander, Assistant Dean for Business and Finance, and Tyler Meier, Executive Director of the UA Poetry Center, were honored for outstanding achievements. Both were nominated by College of Humanities Dean Alain-Philippe Durand.

The annual Awards for Excellence recognize classified staff or appointed professionals for outstanding achievements. The award specifically highlights accomplishments beyond an employee's normal duties, contributions toward operational efficiency, outstanding service to the UA or its visitors, and efforts to promote workplace diversity. The awards are sponsored by the Classified Staff Council, the Appointed Professionals Advisory Council and the President's Cabinet. 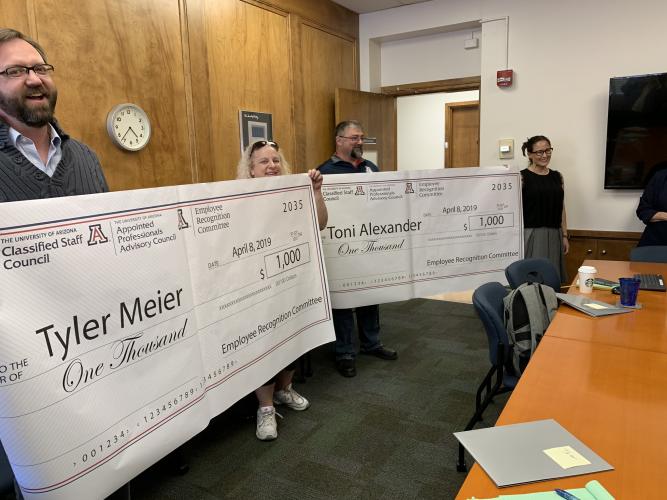 “Toni's positive attitude and generosity with her time have made her a favorite among the COH staff and faculty,” wrote Mary Portillo, senior business manager in the Department of Spanish and Portuguese.

Durand nominated Meier in recognition of his leadership, creativity and passion. Meier is among the college's leaders, Durand wrote, who is trusted with representing the college on a variety of tasks and University committees, including a committee for the UA's strategic plan. Other supporters wrote about Meier's ability to make the Poetry Center operate more efficiently, and his dedication to community outreach.

“Thanks to Mr. Meier's tireless efforts, the Poetry Center's prestige and successes greatly contribute to the College of Humanities' reputation around the nation,” Durand wrote.

Additionally, the School of International Languages, Literatures, and Cultures staff was nominated for the Department Award for Excellence.