Though African countries became liberated from European colonial rulers beginning in the 1950s, the various transitions to independence from Ghana to South Africa produced uneven results.

More complicated than a simple narrative of “failure” or “success,” this decolonization process unfolded as a tug of war between the leaders of protest movements and the defenders of European colonial rule. National liberation did not deliver meaningful freedom to a majority of the people in Africa, for many reasons: departing colonial rulers utilized the structures they left behind to continue to advance their interests in Africa, power was concentrated in the hands of gatekeepers, and the new African elite was politically corrupt.

In a new book, UA professor of Francophone Studies Phyllis Taoua, argues that the idea of freedom in Africa today evolved from this complex history and deserves more careful consideration as part of an emerging cultural narrative of progress and renewal. 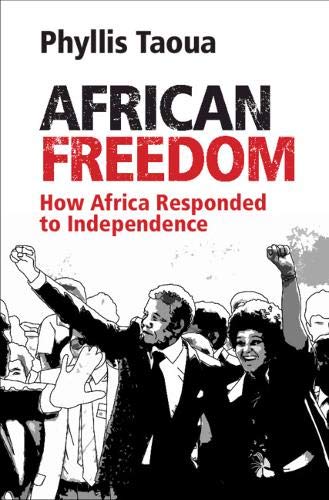 Taoua began researching Francophone Africa in the 1990s for her book Forms of Protest that compared left-wing movements in France and decolonization movements in Africa and the Caribbean. In African Freedom: How Africa Responded to Independence, she draws on research in the humanities and social sciences as well as narratives by major writers and filmmakers in Africa to examine the ongoing struggle to achieve meaningful freedom for a majority of the people.

“There’s a singular narrative in the west about Africa as a land of disease, poverty, illness and war and I didn’t want to contribute to that set of images,” she says. “I focused on the struggle to overcome and on understanding the relationship between ongoing deprivations of freedom and the legacy of national liberation movements.”

The book has generated attention overseas, earning Taoua four invitations to lecture last fall in France and the United Kingdom, and she has just published an opinion piece in The Conversation about elections in the Democratic Republic of Congo.

Taoua answered questions about the legacy of those independence movements and what it means for Africa—and the world—today.

Q: How did you get interested in the idea of African freedom?

A: I got interested in the idea of freedom by reading novels and watching films by modern African artists and looking attentively at their narratives. It did not emerge from current criticism in my field, in fact I take a critical stand against post-colonial theory, which does little to capture the ongoing struggle for freedom in Africa today. A central question I asked myself was: what does that struggle look like from African points of view? I had to arrive at a definition of what freedom looks like in that context.

For that, I drew primarily on the work of two theorists, the Nobel Prize-winning economist Amartya Sen from Bangladesh and a Jamaican-born historical sociologist and National Book Award winning author Orlando Patterson. Ultimately, the definition of freedom that I derived is a complex idea that includes more than political self-determination or national sovereignty.

Q: In the book you describe three types of freedom. What are those and how do they relate to one another?

A: I outline three types of freedom, which are all interrelated and mutually dependent: instrumental, substantive and existential freedoms.

Instrumental freedom deals with concrete rights, like the right to vote and the right to free speech. These are typically human rights issues and instruments that advance the cause of freedom for all.

Substantive freedom is about the ability to make choices, to define our own lives as we have reason to value. Feminist writers, in particular, are concerned with these kinds of freedoms such as the freedom to choose a spouse, to get an education and to engage in meaningful work.

Existential freedom is about the absence of alienation, and a sense of wholeness. It’s intangible and can involve a comprehensive sense of self in the world.

Q: How have African writers and filmmakers dealt with freedom and expressions of freedom in works?

A: My first book was organized historically, but I decided to organize this book on freedom by areas of narrative interest.

The first area involves introspective narratives. We see a lot of works after national liberation movements ended that reconsidered individual identity in the aftermath of these collective struggles. That’s a significant recalibration that tends to get overlooked.

Next comes gender dynamics and hierarchies that emerged as a new consideration after the entrance of women writers and filmmakers in the 1970s and 1980s, so after the movements of national liberation with the exception of southern Africa that didn’t have a multi-racial democracy until 1994.

The third chapter is devoted to a reconsideration of the national experience from a post-independence point of view as just one of many aspects of the struggle for freedom.

Fourth, I consider transnational and global dynamics, particularly with regard to the expansion of neoliberal capitalism and the ongoing exploitation of natural resources in Africa. Historically, this evolution can be linked to the emergence of “gatekeeping dictators” who stepped into power with the help of Western nations. Unfortunately, many civil wars in Africa since the 1960s have been related to the pillaging of resources, especially if there is persistent inequality and a deprivation of the people’s instrumental freedoms.

Lastly, is the spiritual realm, where I address what have been the major responses to what Chinua Achebe famously called “things falling apart.” Three trends in African responses to the colonial imposition of foreign faiths have been: resistance, disorientation, and synthesis. African writers and filmmakers struggle with these questions and what freedom means in the context of intangible loss and existential disorientation.

Q: How does this struggle for meaningful freedom in post-colonial Africa relate to ongoing challenges today as well as in the future?

A: This book relates to issues that are very important in Africa right now. I’ve published several op-eds on human rights in Africa that relate to freedom and these ongoing issues. There are struggles now that will define the future in Africa, like protection against terrorism, movements in support of human rights and inclusive democracy. Who gets to vote and run for office as well as the transparency of those processes are vital issues in Africa today.

There is growing pressure to make the distribution of wealth and natural resources more equitable across societies. You see that in narratives and also in activism. That’s another defining feature about contemporary Africa, these grassroots, popular protest movements against dictators trying to hold onto power. These movements have spread from country to country, from Senegal to Burkina Faso and to the Republic of the Congo-Brazzaville.